One of the main properties of engine oil is its viscosity and its dependence on temperature in a wide range (from the ambient air temperature at the time of a cold start in winter to the maximum oil temperature in the engine at maximum load in summer). The most complete description of the compliance of the viscosity-temperature properties of oils with the requirements of engines is contained in the internationally accepted classification SAE J300.

All-weather oils are designated by a double number, the first of which indicates the maximum values of the dynamic viscosity of the oil at low temperatures and guarantees starting properties, and the second determines the range of kinematic viscosity at 100 ° C and dynamic viscosity at 150 ° C, characteristic of the corresponding summer oil viscosity class.

The test methods included in the assessment of the properties of oils according to SAE J300 provide the consumer with information about the maximum oil temperature at which the engine can be turned by the starter and the oil pump pumps oil under pressure during a cold start in a mode that does not allow dry friction in friction units.

Most of the motor oils on the market today are multigrade, i.e. they meet the requirements for viscosity both at low and at high temperatures.

It is necessary to pay attention to the fact that for engines of various designs, the temperature ranges for the performance of oils of this class according to SAE differ significantly. They depend on the power of the starter, the minimum starting speed of the crankshaft required to start the engine, on the performance of the oil pump, on the hydraulic resistance of the oil intake tract and many other structural, technological and operational factors (technical condition of the car, the quality of gasoline or diesel fuel, the qualifications of the driver and etc.). 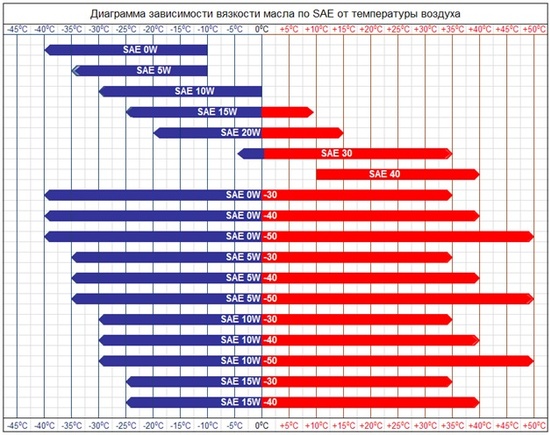 The presence of any shear stress detected by this method means that the test fails regardless of the viscosity value;

According to the API system (ASTM D 4485, SAE J183 APR96), three performance categories for the purpose and quality of motor oils are established:

The API SA, API SB, API SC, API SD, API SE, API SF, API SG categories are now invalidated as obsolete, however, in some countries, oils of these categories are still produced, the API SH category is "conditionally valid" and may be used only as an option, eg API CG-4/SH.

The SL class was introduced in 2001 and differs from the SJ in significantly better antioxidant, antiwear, antifoam properties, as well as lower volatility;

EC (Energy Conserving) - energy-saving oils - a new range of high-quality oils, consisting of low-viscosity, easy-flowing oils that reduce fuel consumption according to the results of tests on gasoline engines.

Universal oils for gasoline and diesel engines are indicated by two symbols of the corresponding categories: the first symbol is the main one, and the second indicates the possibility of using this oil for another type of engine. For example, API CG-4/SH is an oil optimized for use in diesel engines, but it can also be used in gasoline engines for which an oil of API SH and lower categories (SG, SF, SE, etc.) is prescribed.

For automotive gasoline engines, the latest API quality category includes the performance properties of each earlier category and can be used to service older engines where oils of the earlier category were recommended.

Classification for diesel engines - according to scale C

Universal oils for gasoline engines and diesel engines have the designations of both categories, for example API SG / CD, API SJ / CF.

API currently certifies SJ, SL, CF, CF-2, CF-4, CG-4, CH-4 engine oils. Oils of other API classes canceled in the USA should be used if they are approved by the vehicle manufacturers.

Classification of engine oils according to ACEA

The Association of European Automobile Manufacturers ACEA (Association des Constructeurs Europeens de L'Automobile) represents the interests of 15 European manufacturers of cars, trucks and buses at the EU level. This classification establishes a new, more stringent than CCMC, European classification of motor oils according to performance properties.

Each class is categorized into different performance levels:

This is followed by the year in which the category was introduced and, if necessary, the edition number if the specifications have been updated.

TBN is the base number.

Classification of motor oils according to ILSAC

The main differences between oils of the ILSAC category:

When dividing engine oils into classes, the International Committee for Standardization and Approval of Lubricants relies heavily on API classification. So, there are five categories for gasoline engines, diesel engines are not included in the ILSAC classification.

The SAE index, which indicates the viscosity of gear oil, was developed by the American Society of Engineers. This standard has become widespread throughout the world and today the SAE J306 specification is used to determine the viscosity classification of engine oil for drive axles and manual transmissions. This qualification also determines the temperature range in which the use of a particular lubricant is permissible.

Information about the recommended viscosities of automotive oils for use is entered in the vehicle service manual, on the basis of which the user selects the appropriate product in the range of lubricants.

The viscosity of the gear oil must be selected taking into account the highest and lowest ambient temperatures at which the vehicle is planned to operate. Based on these considerations, the SAE J306 classification is based on low temperature and high temperature viscosities.

By analogy with the classification of motor oils, the viscosity grades of gear oils can be divided into conditional series:

The conditionality of such a division is explained by the design features of transmission units of various manufacturers. Depending on the operating oil temperatures and loads, there are units (manual transmissions of passenger cars) for which winter grade oils will provide a sufficient degree of protection in a wide range of external temperatures. It is not uncommon to recommend the all-weather use of winter oils.

There is another standard developed by the Society of Automotive Engineers (SAE) after GL-5 and MT-1 (API graded gear oils) were found to be inadequate in today's transmissions. Made based on these standards plus US military standard MIL-PRF-2105E.

(a)  ASTM D2983;
(b)  ASTM D445;
(c)  The limit must be maintained after 20 hours of testing CEC L-45-T-93, Method C;
(d)  ASTM D2983 method does not provide the necessary accuracy when measuring below -40°C. This fact must be taken into account in any consumer-producer relationship; (e)  Additional low temperature viscosity requirements may apply to fluids intended for use in light duty synchronized manual transmissions (cars, vans, etc.).

According to the API GL system, oils are divided into quality classes. The main features of the classification are the design and operating conditions of the transmission, additional features are the content of antiwear and extreme pressure additives. The classification is described in the API document “Designation of operating lubricating oils for manual transmissions and axles. API Publication 1560, February 1976" <(API Publication 1560, Lubricant Service Designation for Automotive Manual Transmissions and Axles, February 1976).

Classification of industrial oils by viscosity

1 Indices are viscosities with deviations of ±10%.

2 The conversion of kinematic viscosity to dynamic viscosity is based on the average density values of various lubricating oils.

Classification of hydraulic oils according to DIN 51 524

The DIN 51524 classification covers hydraulic oils and is divided into several parts.

The most common are the following classes:

Classification of hydraulic oils according to ISO 6743 - 4

The DIN 51517 standard applies to gears and is divided into three sections:

Gear oils without additives. Can be used in unloaded systems, ISO VG 7-680.

Oils containing additional antioxidant additives and corrosion inhibitors. Class CL oils have a longer service life than class C oils and can be used in systems that do not require anti-wear properties. Typical applications are circulating lubrication systems, ISO VG 5-460.

Gear oils containing, in addition to antioxidant additives and corrosion inhibitors, anti-wear additives. They are used in systems where long shift life and wear protection are required.

Currently, DIN 51517 Part 3 is the main requirement for lubricants recommended for use by gear manufacturers such as Winergy, Flender, Eickhoff, Hansen Transmissions, Moventas, etc., ISO VG 46-680.

Annex A (regulatory) for turbine oils with EP additives. If the supplier of the turbine oil also supplies a set of turbine gears, then the oil must be able to withstand at least the eighth load stage in accordance with DIN 51 345 part 1 and part 2 (FZG).

Requirements for oils for steam turbines. D1N 51 515. Part 1 LTD for normal use

Classification of oils for air compressors according to DIN 51 506

Minimum requirements for compressor oils according to DIN 51 506

Classification of lubricants according to DIN 51 502

3) This breakdown is in accordance with ISO 6743/4:1982 and applies to the 6th Luxembourg Report (Standing Committee on Serviceability in the Hard Coal Industry).